A boy, his sister and Down syndrome

A boy, his sister and Down syndrome

Originally Featured in the Chicago Tribune
Written by Randi Gillespie

It had been a typical morning in our house — kids waking up way too early to raid the freezer for frozen chocolate chip waffles instead of cereal or fruit. I overhear their voices giggling and making silly jokes to one another while playing “Minecraft” on their iPads. They are adversaries one moment and each other’s greatest champions the next.

But all good things must come to an end, and Liam, 7, became upset with Maddy, 9. She was not following his rules and was becoming too silly for him. She persisted with her ways, ignoring his rules. She was unaware that her actions were pushing his buttons. Liam was losing his cool. “Just listen to me and do what I say. Maddy, don’t do that, don’t push that button!” Maddy giggled, continuing to play the game her way. All she wanted to do was play — without limits or rules. All he wanted to do was to have her play by his rules.

Provoked, Liam shouted at Maddy: “I wish you did not have Down syndrome.” Yep, he said it.

He instantly looked at Maddy, expecting her to respond to his angry words. Maddy continued to play her game, giving no consideration to what was just said. Unable to get a reaction from his sister, Liam turned his eyes toward me. Our eyes locked and, without hesitation, he did what any 7-year-old would do — he ran to his bedroom. He likely was upset that he said it, but mostly he was probably anticipating the consequences I would deliver.

Should there have been immediate consequences to his unforgivable statement? Just the thought of my own child using such harsh and hurtful words, especially when directed at his sister, should have been devastating. Admittedly, his words cut right through me because my daughter has a disability. But why? They were Liam’s feelings, and I certainly was not going to fault him for feeling what he was feeling at that moment with his sister. However, his response needed to be addressed.

Contrary to what Liam might have thought my reaction was going to be, I empathized with him. I was also very proud of him. That statement may not make me the most popular mom, particularly with parents of special-needs children. Do I believe that Liam wishes Maddy did not have Down syndrome? Yes, I do — for now. At times, I am certain my son feels slighted. He wants the entire “sibling package,” with both sisters wrapped up nice and neat and tied with a bow. He has no idea that sibling love, any love for that matter, comes in a variety of packages.

At his age, he does not yet know that having a sister with a disability will positively shape him in ways that he cannot imagine. He is embarrassed at times by Maddy’s actions and behaviors. As he matures, this will allow him to grow to accept everything that makes Maddy who she is. 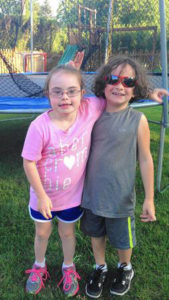 He will have a broader perspective of what “normal” is than most of his peers. Hearing his own sister being referred to as the “R-word” will enable him to teach those around him that it is wrong to dehumanize others with such offensive language. He will remind people that his sister has the right to be valued, respected and accepted — just like anyone else. He will be courageous and strong and will not allow bullying to be tolerated.

He will recognize that the diagnosis, condition or illness does not define the individual. It is simply a part of what makes him or her unique.

He will examine and interpret the world differently. His eyes will see things in a way that others who do not have a sibling with a disability cannot.

He does not know it yet, but he will be the man others will look up to for courage and values. The frustrations that Liam voiced that morning will eventually fade and yet will become part of the fabric that will turn him into the caring man he is meant to become.

Later that morning, Liam returned to the playroom to resume playing “Minecraft” with Maddy. She welcomed him back, saying with a huge grin, “Hi Liam, no rules, OK?” Sibling love: The good, the bad and the ugly … I would not have it any other way.

Randi Gillespie lives with her husband and three children in Northbrook.  She is Director of Special Needs Services at Oak Wealth Advisors.

Beware of the Language Minefield